In 38 day it will rise! Pre-Order and be ready. Legend of the Mantamaji: Book 1 https://legendofthemantamaji.com/portfolio/book-one/

10/8/14 is coming fast. Have you Pre-ordered your copy of LegendoftheMantamaji ?

Stop by the Pop Culture Comic Expo in Sherman Oaks today and pick up Advanced copies of Legend of the Mantamaji.14201 Huston St, 91423 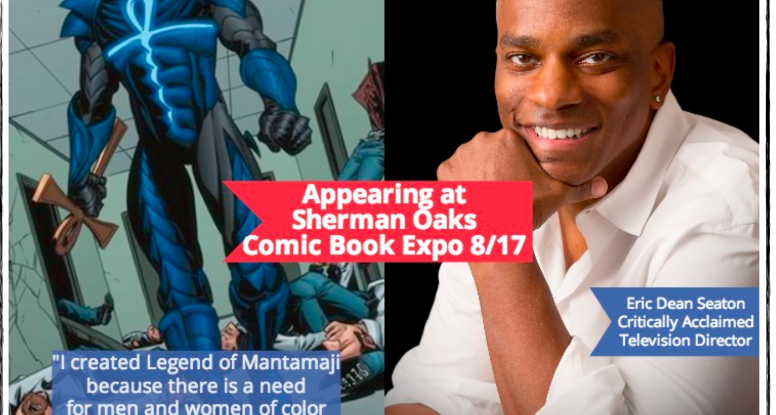 Television Director Eric Dean Seaton will be on hand to sign and sell copies of Book 1 and offer exclusive limited copies of the complete series.

PRLog – Aug. 15, 2014 – LOS ANGELES, Calif. — Critically-acclaimed television director Eric Dean Seaton is appearing at the Sherman Oaks Pop Culture and Comics Expo to promote his new graphic novel series “Legend of the Mantamaji” [http://www.LegendoftheMantamaji.com] on Sunday, August 17, 2014 at 14201 Huston St., Sherman Oaks, California. Seaton’s appearance is a special treat for attendees as the first book is being made available to the public before its October 8, 2014 release date. Seaton is also bringing a limited number of copies of the complete series as an exclusive.

“Last month we offered the entire series as a Comic-Con Exclusive in San Diego to attendees and the response was overwhelmingly positive,” Eric Dean Seaton said. “Many who bought the first book in the series came back later during the convention to buy the rest. The “Legend of the Mantamaji” series was the only Comic-Con Exclusive by an independent publisher at the San Diego event.”

A three book series, Book One is set for release on October 8th, with release dates for Book Two and Book Three scheduled for December 10, 2014 and February 11, 2015, respectively. The books are also available for pre-order on Amazon, Barnes and Noble and the Legend of the Mantamaji website.

“The Legend of the Mantamaji” follows the story of Elijah Alexander, a brash assistant district attorney, who suddenly discovers he is the last of an ancient race of warriors sworn to protect humans. Fast-paced, heart-stopping action combines with a layered, thoughtful story full of hair-raising plot twists as Elijah struggles with the truth of who he is and what he means to the world.

The book features artwork by Brandon Palas, colorist Andrew Dalhouse who has worked with From Boom, Dark Horse, Image, Marvel and DC and lettering by Deron Bennett, who was nominated for an Eisner Award two years ago for his work on titles like Jim Henson’s Dark Crystal, Jim Henson’s Tale of Sand and Helldorado, among others.

A graduate of The Ohio State University, Eric has also directed episodes of the NBC/Warner Bros. comedy “Undateable,” BET’s “Let’s Stay Together” and “Reed Between the Lines,” and directed the pilot and co-executive produced the Starz Kids and Family Channel and international hit, “The Wannabes Staring Savvy.” He has dreamed of being a comic book creator since his childhood in Cleveland, Ohio. Eric is a member of Alpha Phi Alpha fraternity and he, his wife, son and daughter live in California. You can see Eric’s work atEricDeanSeaton.com or follow him@ericdeanseaton on Twitter. 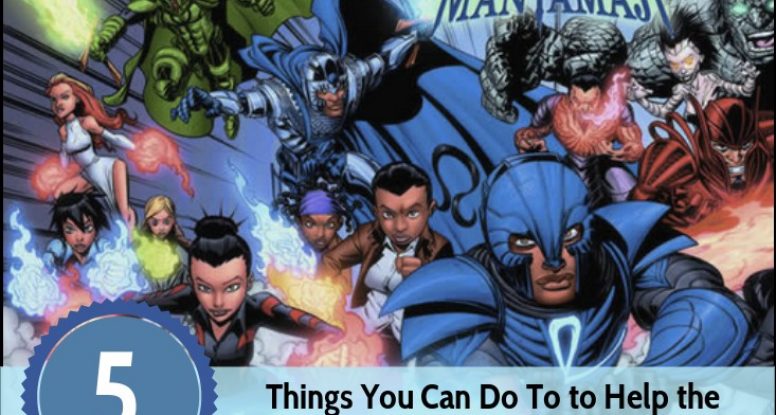 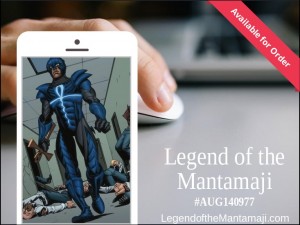 The journey to launching my first graphic novel series “Legend of the Mantamaji” has been a long, fun and interesting one. Along the way I have met new friends and fans and they have asked me how they can help get the book into the hands of thousands of new fans.

Sometimes you follow a passion and you don’t know where it is going to take you or who will “get” where you are going. I knew if I started off with a good story based on a flawed character that learns to accept his place in the world that people would like the story. And so far it has been working because the feedback on the series has been amazing. The entire series was a Comic-Con Exclusive in San Diego this year and I had people who purchased the first book come back to buy the rest of the series. The idea that people outside of friends and family want to support my work…this SIX YEAR passion project…is simply awesome. There are a couple of things you can do between now and Book 1’s release on October 8th:

Reach out and visit, call, email, tweet or Facebook your favorite comic book store and ask them to order the book – item number AUG140977. You have to contact them by Wednesday, August 20th.

2. Legend of the Mantamaji Ambassadors Needed

Become a Legend of the Mantamaji Ambassador. We are looking for 100 people to read the book, review the book and help us spread the word on social media. It’s easy and it comes with plenty of perks. Sign up today we are close to reaching our goal!

3. Pre-order the Legend of the Mantamaji

Book 1 will arrive in your mailbox or on your device on or after October 8th, but only if you order it. Buy the book.

4. Legend of the Mantamaji on Social Media

Help us spread the word on the series by retweeting posts from my twitter feed @EricDeanSeaton, following the hashtag #LegendoftheMantamaji and sharing posts from Legend of the Mantamaji on Facebook.

5. Reviews of Legend of the Mantamaji

Comic conference goers have had the chance to get early release copies of Legend of the Mantamaji and we need your honest reviews up on GoodReads.com.

I just want to thank everyone again for your support. This has been a dream of mine since I was a little kid and I am grateful to share it with you. 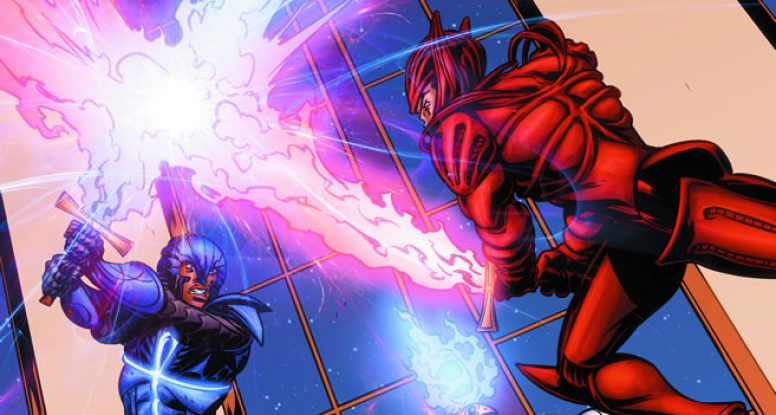 Legend of the Mantamaji Fan Letter 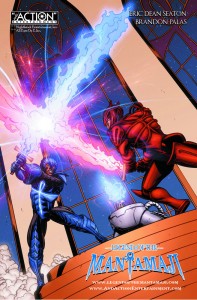 This is a great letter we received from a fan we met at Comic-Con San Diego. The missing parts of Ms. Magracia’s review were redacted with her permission to prevent spoilers ;0):

At Comic-Con this year I, Divina Magracia, bought the full trilogy of the Mantamaji series with my father. We greatly appreciated the glasses Mr. Palas added to our free sketch that came with the series and the short conversation I had with Mr. Seaton about working in the entertainment industry. I apologize for the delay in getting back to you about the series; I took my time and savored the experience, just finishing the series today. Forgive me if my review is a bit long.

Elijah and Sydney were very real and human characters to me, and I appreciated that immensely…The development of Elijah’s participation and acceptance of his destiny was neither too stilted nor too rushed. I thought it was great how honest he was about his desire for revenge, and the moment when he realizes how close he was to being the same as Sirach was beautiful to me.

Similarly, Sydney’s heroism struck me and I loved how her background wasn’t a sob story but a foundation for her determination and success in a believable way…Speaking of subtle, I thoroughly enjoyed the way Noah’s role was handled throughout the series. He was a large part of what kept me reading partway through the second volume of the trilogy.

The villain, oh Sirach the villain… I have a certain inclination toward villains the reader can empathize with and understand. My favorite part was how Sirach really believed he was going to fix humanity. The scenes where he was disappointed and disgruntled with the corruption of his [followers was] great.

Hopefully that wasn’t too long of a review. I remember Mrs. Seaton letting me know she wanted to hear what I thought of the series so I hope this fulfills that well enough. The characters in Mantamaji were wonderful to read about. Overall when I read I tend to latch on to the characters, the people that bring the story to life. It’s one of the reasons why I would like to go into casting as a career.

Talking to Mr. Seaton about working as a television director was quite inspiring and I hope my future career is just as rewarding for me.

Thank you for your time and for the pleasure I had in reading the series,
Divina Magracia
University of California, Berkeley ‘15
Media Studies w/Music minor