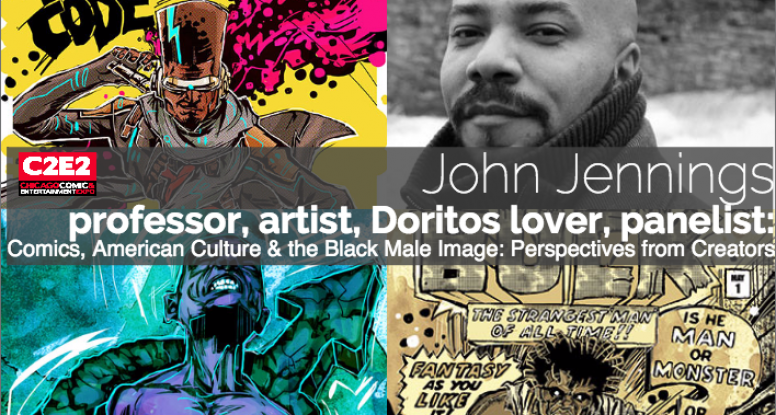 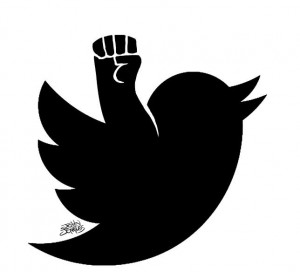 AAE: What is the greatest issue facing black male characters in comics in their various forms? Invisibility, marginalization or mischaracterization?

The black indie market is growing but, the mainstream simply has more years, capital, and media outlets to get their stories out. So, even though the characters are there, it’s hard to get them into the mass market because the larger companies are controlled by massive conglomerates that can dominate airwaves, web sites, screens and whatever other means to get to the audience.

We suffer from symbolic annihilation. The erasure of people through omission by the dominant culture.

Click to Tweet: We suffer from symbolic annihilation. The erasure of people through omission by the dominant culture.

AAE: It has been said before that being a person of color creating comics is, in itself, an act of protest. You created the iconic Black Power Twitter photo, participated in APB and regularly create comics that explore Afrofuturism and the Black imagination. Do you feel like what you’re doing is radical or transformative or is it normalizing comics?

I am very much aligned with how W.E.B. DuBois thought of black art of any kind; it’s propaganda that should be geared towards liberation.

I try to have as much fun as possible while making my stories but, at the end of the day, I want my work to help undo oppression on every level. As long as I have breath in me, I will make work that attempts to do this – until it’s no longer needed.

Is that radical? Some people may think so.

I think it’s just why I make art.

AAE: Which creators are “getting it right” in terms of representing diversity in the Black Male image in particular?

AAE: When you hear the phrase “black male characters in comics” what is the first thought in your mind?

AAE: If you could have any superpower – what would it be?

JENNINGS: That depends. Am I the only person in the world with superpowers
or are there others?

Because if their are other super folks then I’d want’s Rogue’s power.
I’d immediately then suck up Professor Xavier’s power, Madrox The
Multiple Man, and Spider-Man’s powers 😉

If I am the only super..then I’d want to be a telepath/mind controller
dude like Prof. X.

AAE: If the current presidential candidates were comic villains who would they be?

JENNINGS: Sigh. The thought of this Presidential race makes me too afraid to
even answer this.

AAE: When did you fall in love with comics?

JENNINGS: Eons ago, in the early 70s, when my mom got me my first Marvel Comics.

AAE: Three things you need to get you in the (writing) mood?

JENNINGS: I am always in the writing mood! Seriously. I have the opposite of ‘writer’s block’.