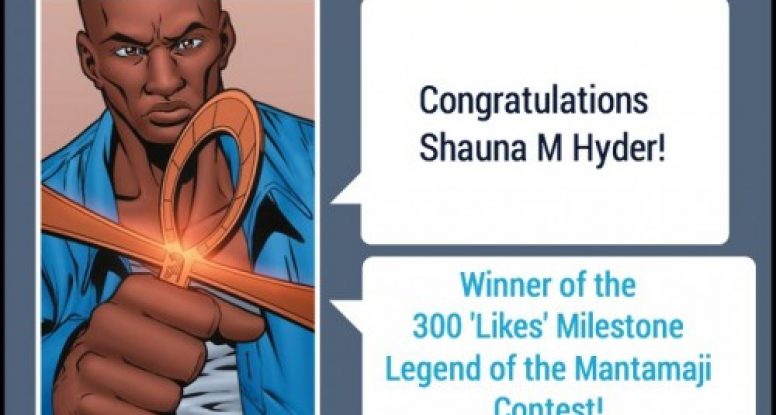 When Legend of the Mantamaji team headed off to San Diego’s Comic-Con we had a chance to interact with friends and fans. We also gained new fans on Facebook – over 200 actually. The support from the fans has been huge so we wanted to say thank you. We held a Facebook contest to celebrate our 300 likes and asked one simple question: “What does Elijah Alexander do for a living?”

Congratulations Shauna, you are the winner of an autographed copy of The Legend of Mantamaji Book 1! 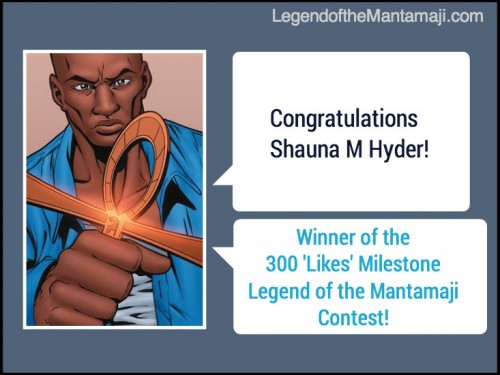 Thank you to everyone who entered and keep your eyes peeled for another contest coming soon!

For the Comic Book Store shoppers the time is now! Order Legend of the Mantamaji: Book 1 before 8/20/14!

Legend of the Mantamaji was fortunate to receive press from the widely acclaimed blog Racialicious this past weekend while we were at Comic-Con San Diego. The post highlighted several talented comic and graphic novel creators of color to see while at the event.

Besides Legend of Mantamaji, author Arturo R. García also featured Erika Alexander and Tony Puryear of Concrete Park, Cathy Camper of Lowriders in Space, Ulises Farinas and others. Check out the post, these are creators doing great work that need to be supported: THE SDCC FILES: CREATORS OF COLOR TO WATCH AT THE CON 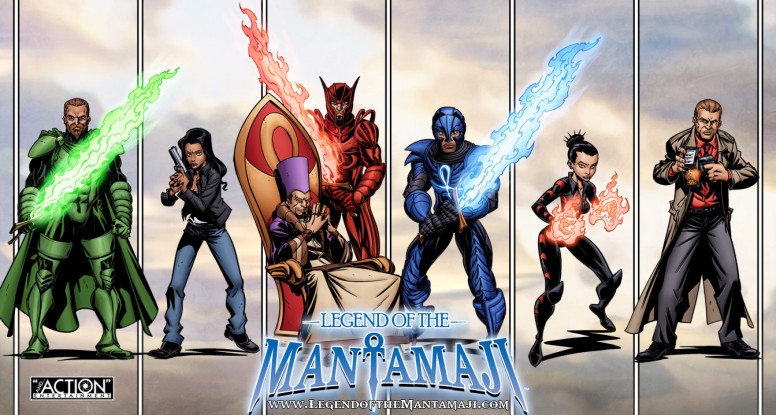 Working hard at Comic-Con San Diego, Eric had a chance to talk to Wilson Morales from BlackFilm.com about the inspiration behind the Legend of Mantamaji and why black comic creators aren’t as visible and it has nothing to do with superhero cloaking abilities. Plus the answer to…how do you pronounce “Mantamaji?”

Check out the video below and read the rest of the article here: If you’ve ever seen episodes of shows like “That’s So Raven,”…or the current series “Undateable,” then you’ve seen prolific and award-winning director Eric Dean Seaton’s work.  And, if you happen to be at Comic Com 2014 from July 24 – 27, you’ll get to see even more of his work AND meet him in person.

After building a successful career as a television director that began with an internship during the final season of “The Cosby Show,” Eric Dean Seaton has translated his talent for storytelling into the Legend of the Mantamaji series of graphic novels. And, as he shared with us, the worlds of television and graphic novels aren’t nearly as far apart as you might think.

“Legend of the Mantamaji” was the culmination of all the things I learned about story telling while working for The Disney Channel and Nickelodeon.  Their characters can be broad and the stories tailored more towards kids but the art of telling a story is the same.  You have to have heart, it has to mean something, the main character needs to be flawed and learn a lesson and you have to take the audience on an adventure. ”

And, as it turns out, the art of creating adventures for himself and others is something Eric has been perfecting since childhood.

Read the rest of the Wiles Magazine Profile here…

Much love to @genosegers who brought his smooth styles to Table P-13 and purchased the series! legendofthemantamaji sdcc