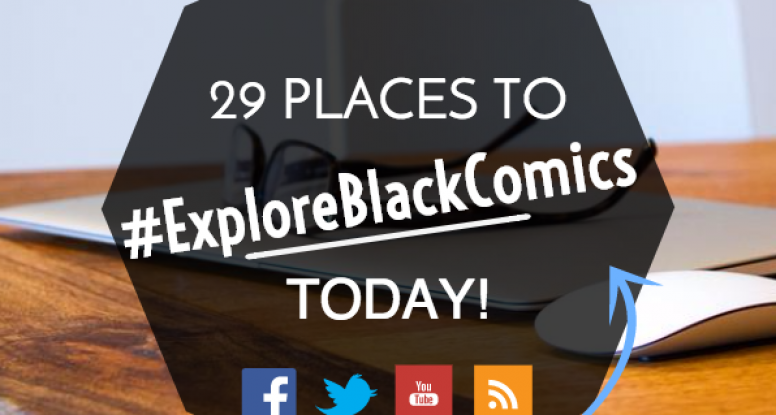 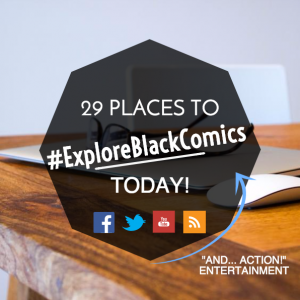 Sure, comic book companies gain more fans and “street cred” when they hire diverse talent and executives and publish products with a focus that lies outside of the outdated “white male” pool of characters. Comic book fans benefit when they push for diversity in comics because, by doing so, they gain new characters and varied stories. But fans also have a responsibility to seek out existing stories and creators who are already producing fantastic work.

This call to action is much bigger than Legend of the Mantamaji – which is why we aren’t just championing sites that have reviewed our books or carry them in their stores. Instead, we are highlighting sites and reference materials that work diligently to highlight creators of color and stories from a variety of genres, publishing companies, formats, etc.

This month is Black History Month, so we are highlighting Black creators, characters and publishing houses. But remember, diversity doesn’t begin and end with race.

Now, keep in mind, this is by no means an exhaustive list. This is a starter list – a place for you to check back with each day to try a new site, or pick a new book or series to try out. In March we will explore women in comics, so stay tuned! 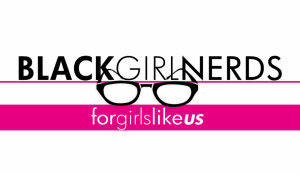 Jamie Broadnax and her crew have their finger on the pulse of pop culture and are ahead of the curve in spotting up and coming comic creators with their “Creators You Should Know” column.

With posts titled, “Magical Books for Black Girls,” The Blerd Gurl hits all the right notes with her reviews and news about comics for consumers and comic creators alike.

When asked why he created digital comic book store, PeepGameComix, Black comic book creator Imani Lateef said it was in direct response to “The Question.” You know the one: “Where can I find Black Comics?”

“Fans are also starting to use Peep Game as an answer to the question, ‘How can I get into Black Comics?’ Lateef said. “In fact, several educators have been using the website as a learning tool to introduce students to black comics, graphic novels and speculative fiction.” 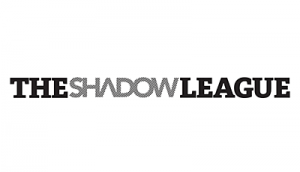 Lead by Richard Hazwell, the Shadow League’s Comic Book Convo series is a must read. The series includes conversations with up and coming creators and other leaders in the field and explores a wide range of comics from creators of color.

Not only does the site offer reviews, insight and interviews about Black comic books and creators, but it boasts a pretty large listing of Black comic book characters, including their powers and where these characters appear.

Cool website with a variety of pop culture and BMX commentary that also features a dedicated comics section. Recently gave an in-depth look at the Black Comix Festival in Harlem, New York.

Widely known for its music festivals, Afro of the Day social media posts and exploration of issues in the Black Diaspora, AfroPunk is also dedicated to promoting Black Comic Books and creators. The site is especially adept at highlighting indie comics creators. 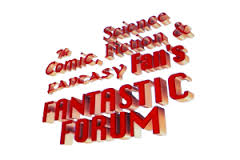 The Comic, Science Fiction & Fantasy Fan’s FANTASTIC FORUM is a half hour TV series dedicated to various comics genres and fans who fuel the industry. The program is segmented with a panel discussion, interviews, event coverage, parodies, toy/game profiles and producer features.

Geek Soul Brother’s job is to introduce the older generations to something new and younger geeks to the geek universe that was around before they were born.

FanBros.com is a natural extension of the FanBrosShow podcast, with articles, reviews and previews that focus on exploring the diverse world of nerd culture and all that it represents. From editorials, to the latest news of the day, you can find everything you need to keep you up to speed on what is happening in the world of Fan Bros.

An editorial and informative website that focuses on popular, nerd and geek culture from the perspective of People of Color.

The Museum Of UnCut Funk

Geekdom and new comic discoveries (and spirited discussions) often happen in Facebook groups dedicated to all things comics and pop culture. Check out (and join) these groups.

The Extraordinary Journey of a Black Nerd 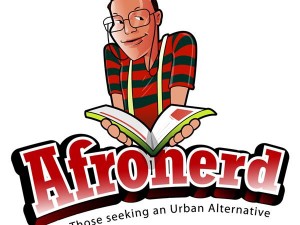 The Black Guy Who Tips

Back to the Pod

The Blacker the Ink by John Jennings

The Untold History of Black Comic Books by Bill Foster